We can so clearly remember bringing Lilly home from New Jersey as a pup, it is hard to believe that it was almost 14 years ago.

On the way to her new home she didn't want to drink, eat or even go outside on the grass. She certainly made up for all of these during her time with us. Whenever people visited, invariably they would helpfully take the roll of toilet paper from whatever high location it occupied, and put it on the holder, not realizing that we had learned long ago that Lilly could not resist this supply of soft, chewable paper. If she couldn't locate that, she would steal tissues from pockets, napkins off the table, and paper towels from wherever she could.

As she aged, she could no longer hear, we were worrying about her eyesight, and finally, in the past months she began a decline in her mobility (although sometimes still the milk disappeared from your morning cereal bowl if you left it unattended on the table).

As with some of the others before her, she had her last trip to Maine. She appeared fine when taken out in the morning, but declined her breakfast. For a dog who was obsessed with food, this was alarming. She lay down, and never regained the strength to get up again. We rushed for home, making her comfortable as we could on a bed of pillows and blankets, but she left us sometime during the ride home from Maine.

As demanding as she was, and yes, often times as annoying as anything, her end was graceful and peaceful. And as with the others, we will miss her greatly.

Posted by FortHill at 7:36 AM No comments:

The Things We Leave Behind Deserve Stories 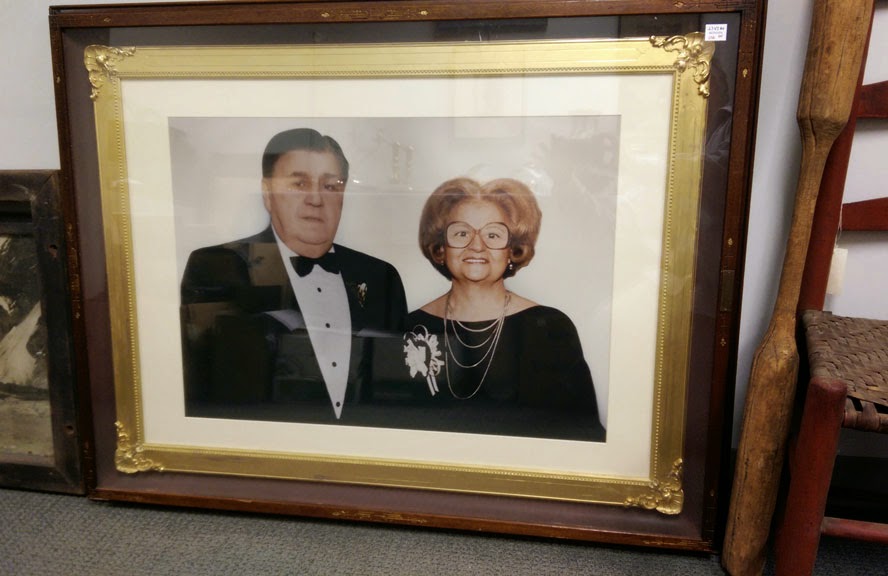 Being involved in the antique trade you see many items come to the market that would seem to have a story behind them (or perhaps I just want there to be a story). Valuable jewels and works of art make you wonder if a family has fallen on hard times, or if they need to be sold to satisfy the needs of heirs; or maybe they simply lost interest in the item and want the money to do something else.

When household furnishings are sold at auction you wonder: are the people downsizing, redecorating, moving, divorcing, or in many cases, simply deceased? These types of sales seem to be understandable. But oftentimes, whether in with these lots of goods, or offered individually, there will be items that would seem to have far more sentimental rather than intrinsic value, and I can't help but wonder how these came to be sold.

Many years ago I went to an auction where what appeared to be an entire household was put in storage before 1920, and not disposed of until the mid 1970s. From the nature of the items, and the fact that the storage bill was apparently paid all those years, the family was well to do. I suspect many of the items were wedding gifts, as they were lovely examples of glass, china and silver. But there were also many everyday items, from clothing, to children's toys to holiday items. It still remains with me to this day, wondering what could have happened, and while they simply may have moved to another country and never bothered to retrieve these things, why hold on through the many years when they would have had little practical or  antique value? I am sure sentiment was involved, and so I conjure more dramatic and tragic scenarios, such as the family being lost in a ship sinking or other disaster, where the surviving family simply packed up the evidence of their lives so the could "deal with it later".

But whatever the reasons, the artifacts of our lives will often live on after us, and pass through other hands. When I go to auction previews (I often think of them as the place "where old wedding presents go to die") and see the wide range of items put out for display and ultimate sale. This week, at one preview, there was a large (and I mean really large) lot of miscellany. These  types of lots include the entire contents of a room or rooms, swept up into one group and sold for one price. There are usually no particularly interesting items in these lots, just "stuff" such as we all have in the back of the kitchen cabinets or in the cellar, but this lot had one particularly eye catching item. It was a large photographic portrait of a couple, most likely taken at a major event in their lives, probably an anniversary. While it didn't look that much different from the typical family photo, the large size (approximately 2 x 3 feet), and the elaborate frame would make this the focal point of any room, and implied that someone, at some point placed great importance on this image.

As an artifact, it was arresting, and seemed to have a "Diane Arbus" quality to it. And the more I looked at it, the more I wondered what led it to wind up for sale in this lot of household detritus. It did not appear to be that old (perhaps 1970s or 80s); was there truly no family left who remembered these people? Or at least cared enough for their dignity to remove the photo from the frame before sale, lest their family members wind up looking out from the wall of some flea market or second hand store for years?

Or will someone just dismantle this because "I can use the frame for something"? 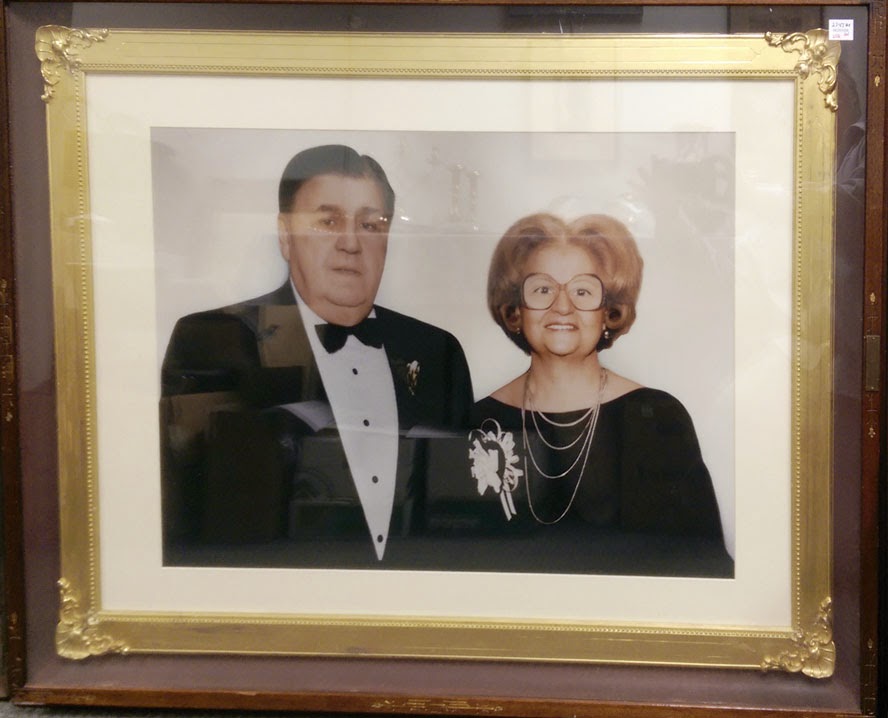 Posted by FortHill at 1:42 PM No comments:


This summer in Maine I finally managed to make the ferry trip to Monhegan Island, about 10 miles off the mainland. Well known for its scenic beauty, including harbor, cliffs and a lighthouse, it was also been famous for the painters who worked there, and of course, for the art lovers who make the pilgrimage to try their own hand, or at least soak up the atmosphere.

Monhegan pretty much lived up to my expectations, and while I certainly took many photos of the village and shoreline (I'll post some of those later), I was not expecting forest, and was intrigued with the dead trees. The forest in the center of the island was, to use a cliche, like a cathedral, quiet and serene. Along the coast, high above the cliffs, many of the trees were kept to almost a bonsai version by the wind and weather. Trees once dead had their skeletal remains dried and whitened by the winds, in some places forming almost a "ghost forest". 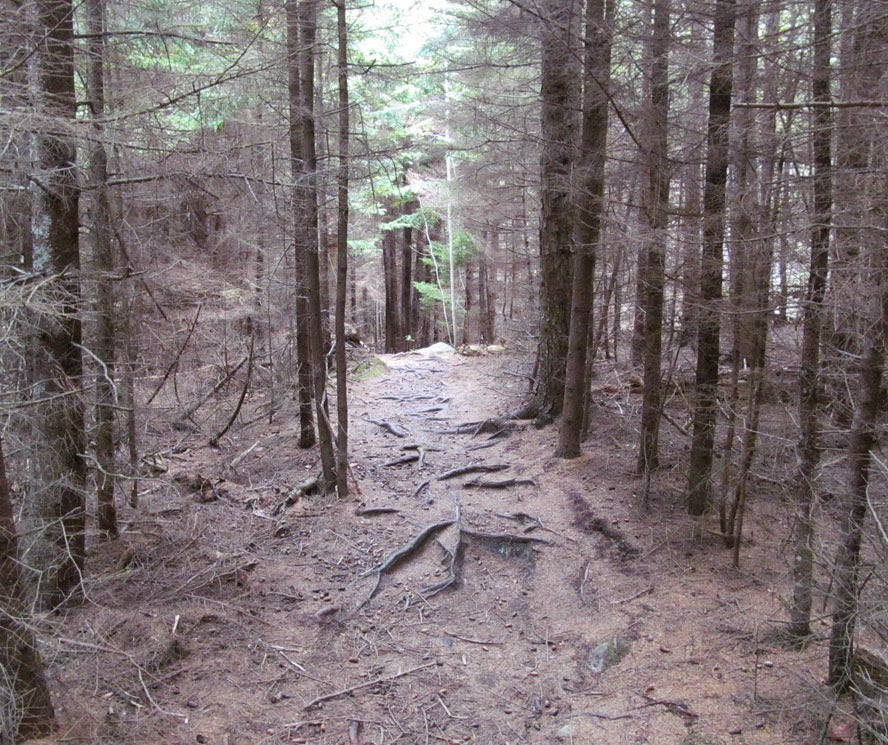 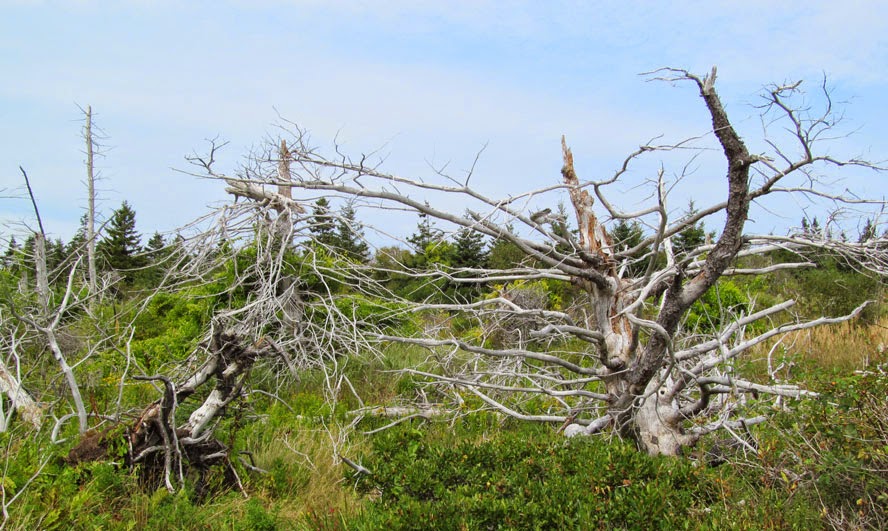 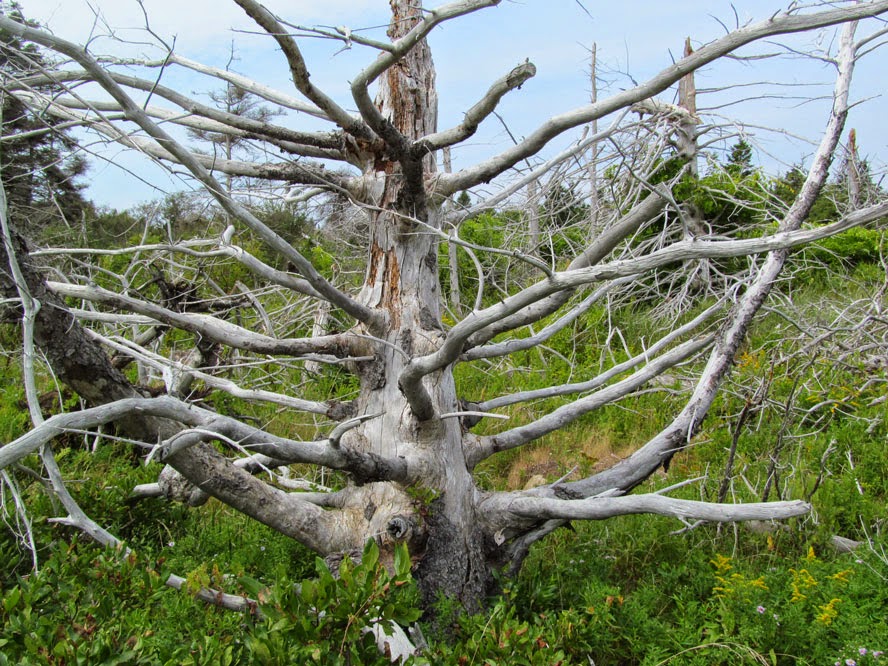 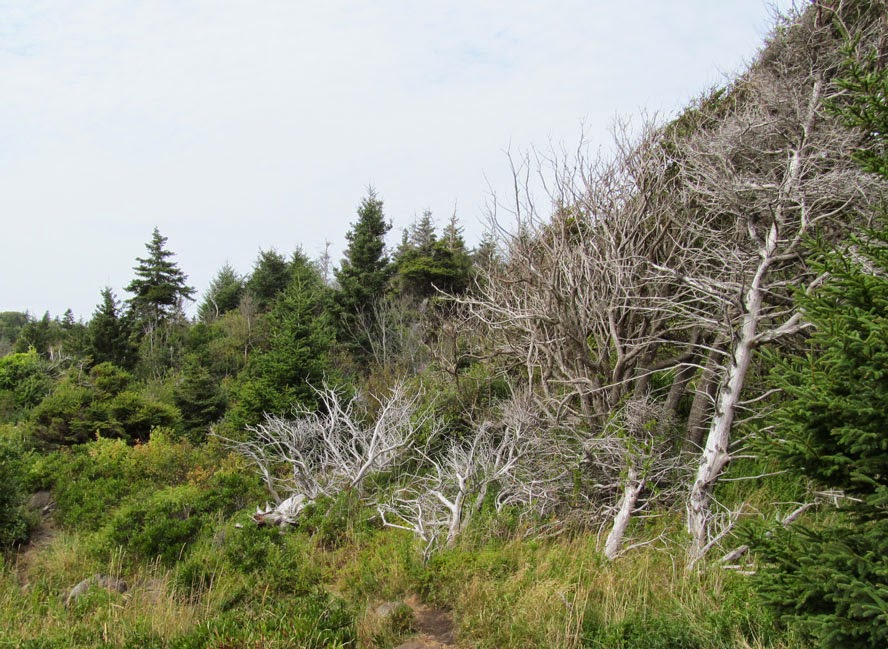 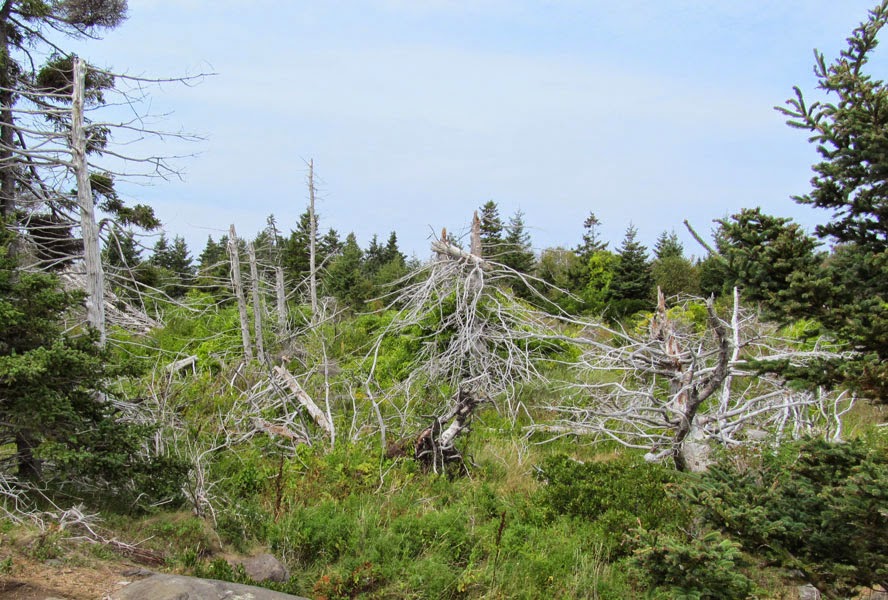 Posted by FortHill at 6:53 AM No comments: