At the Maine Antiques Festival (including monsoon) 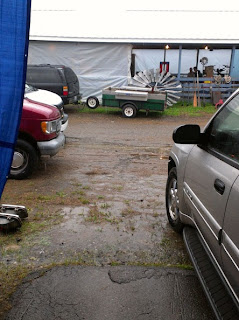 It is almost a tradition that there will be some sort of weather event at the Maine Antiques Festival held each year at the Union Fairgrounds. This year, on Friday - the day of setup and early buying - we had a monsoon. I was fortunately under cover, and was able to drive my van in and unload before it really started. But it rained in varying rates for the remainder of the day, the fields were flooding, and there was mud, mud and more mud (made worse by the vehicle traffic). 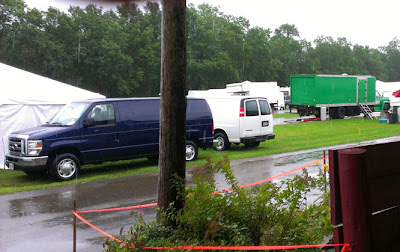 I was able to use the doors I found in the cellar as a backdrop to hang mirrors, so I am glad that I rescued them.

The rain didn't keep the shoppers away on Friday (although I can't imagine paying $25 to slog through the water. Those of us under cover seemed to have a captive audience, and the day went well. 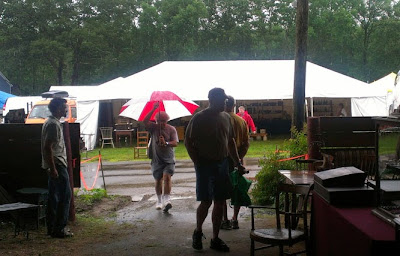 Sold lots of stuff, made some more contacts for frames and gilding services, so all was well in the end.

﻿
It seems that in New England, we are known for our difficulty in parting with things that would appear to have outlived their usefulness. And in fact, I (and others) often find inspiration in them. you may remember seeing this scene from one of our painting sessions at a florist's premises, where some of us were more interested in the debris pile than the flowers. 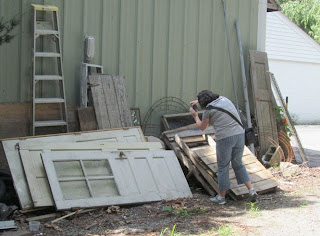 I even completed a water color of this scene.﻿ 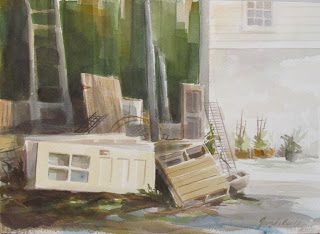 Then, a few weeks later, I was cleaning out the cellar in Maine, and after hauling these old doors out of the cellar, took some photos to use as a reference for a potential painting project. 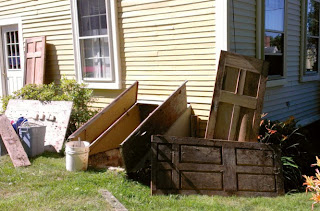 I was planning to take them to the dump, even though it was against my nature, but instead, took them home and painted them so that I can use them as a display backdrop. But when I get a chance, I will still do a painting of them as they looked when first seeing the light of day after years in the cellar. 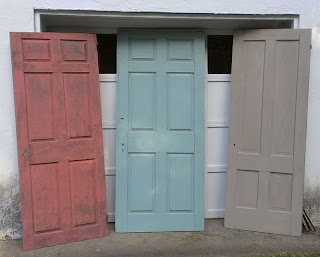 Posted by FortHill at 9:45 AM No comments: