It's Spring, so Let's Strip!

A sure sign that spring is here is not the blooming daffodils, but Joseph out in the driveway with paint stripper. I had several mirrors that needed to be done, and due to the hazardous nature of the materials, will only strip paint outdoors, on breezy days. And since I had a few to work on, it feels good to get as much out of the way as possible.

This large convex mirror is not period, but a substantial and impressive look. Probably from the 1940s-50 era, it was not done in real gold, which was evident by the areas that had darkened and some parts had turned green.

I'm not sure what I will do with this - since it is not period I can do something more creative, but some re-gilding will be involved. I need to replicate some missing pieces to one side ornament, and the spherules will be replaced with water gilt ones.

This small Federal mirror did not look that appealing when I purchased it at a recent auction - the bronze paint had turned dark, and touch-ups were a coppery color. It also had some damage, but the eglomise panel, while crudely done, was an original in fine condition.

Stripping the paint shows what this mirror has the potential to become. Fortunately the spherules were in good shape, so that is one blessing, and the gold on them was still intact after stripping. 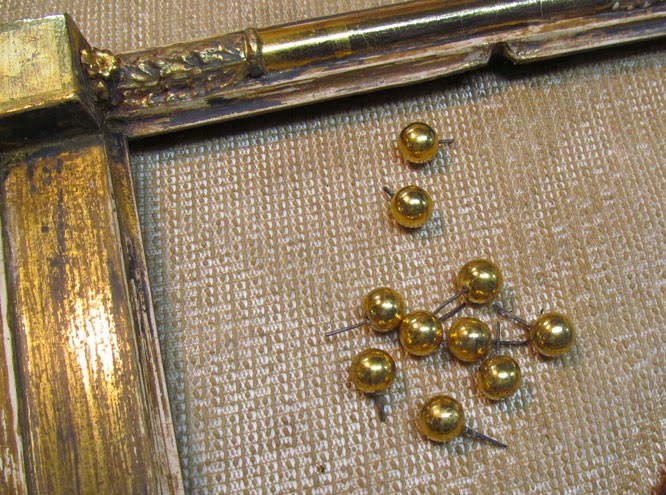 The third mirror is a late Sheraton with a relief carved panel applique. Again, a heavy hand with the bronze paint killed any charm this may have had. Just stripping brought back quite a bit of the original surface, and I may be able to do the repairs without re-gilding (although I will probably need to do all the existing spherules, plus make replacements for the missing ones.

Well, these may not get worked on again for a while, but it is nice knowing that the dirtiest, worst part is over. More posts will follow as these projects move along.

Posted by FortHill at 2:31 PM No comments:

This winter project for a client in Maine is probably late 19th/early 20th century. Allover gilded with areas of burnished and matte gilding (or bronze powder gilding). There are painted bands at mirror edge (simulating an ebony liner).

These mirrors are a classic style, and are always popular, even when out of period. Due to their fragile nature and construction, they often have damage. Any time gesso is applied to a curved surface, age shrinkage and warping tend to have an exaggerated effect. In this case, there were numerous areas of gesso loss: a 3-4" section of top convex band, and areas at outer edges, plus losses on large fruit cornucopia ornaments. The spherules were almost all badly compromised. The bottom pendant ornament was missing approximately 2-3 inches at left side and bottom center leaf.


Wishing to avoid a full re-gilding, some areas of damage were stabilized as much as possible, but not stripped. Gesso applied where missing, over new carving on bottom pendant, and on spherules which needed to be stripped and completely redone.

After distressing/toning, the mirror retains a worn appearance, and if anything, look older than its actual date. More reliable hanging hardware was installed, along with additional bracing for basket ornament.

Posted by FortHill at 1:00 PM No comments:

One of my current projects is a reverse painting on glass of a harbor scene.

This request came from a man in Florida who wanted a panel in a mirror, but had no original to copy. Since the mirror was possibly not period, and there was no restriction on the design, the decision was made to honor his wife's home town of Salem, Massachusetts. And since the style of the mirror is Federal, which is the period at which Salem was at its height, this seemed like a good match.

I had done something similar before, but there were difficulties finding images that were iconic enough to be read as "Salem" without presenting historic anachronisms.

The solution was to use a section of a painting in the Peabody Essex Museum showing Crowninshield's wharf. This reflects the influence of the China trade which brought wealth to Salem, and the influence of Asian decorative arts to the western hemisphere.


Due to our now famous "winter from hell", as well as assorted mishaps and other issues, our planned trips to the Peabody to view the painting in person kept falling through. The test panel I am preparing to work out the design will have some areas of ambiguity, as the on-line image was not of high enough resolution for me to see all the detail. I am planning that before the final panel is done, I will be able to photograph the original painting. 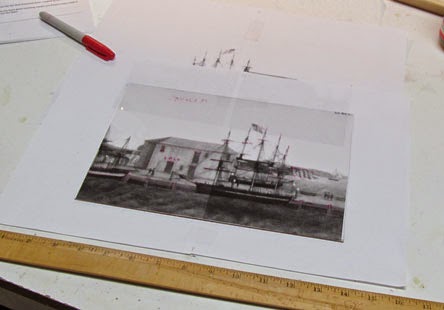 The first steps were to create a pattern, which, thanks to modern technology, was not difficult (as long as you remember to flip it, since you are painting in reverse!). I added a "Salem" sign to the side of the building, as it seemed the most graceful way of identifying the location.

Since this was a complete new creation, I needed to make at least one preliminary glass. This is not as refined as I want in a finished glass, but it is simply to work out the design, colors, and find out where the problems will arise. In fact, it may even be necessary to do another pass at a test panel before the final, but even if that is necessary, it will still be possible to work on that and the final panel simultaneously. 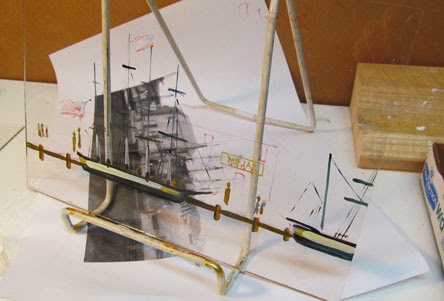 Even simple designs require drying times between some steps. In this case, there are more steps involved, and the logistics of what to paint in order to shorten the process can be frustrating. 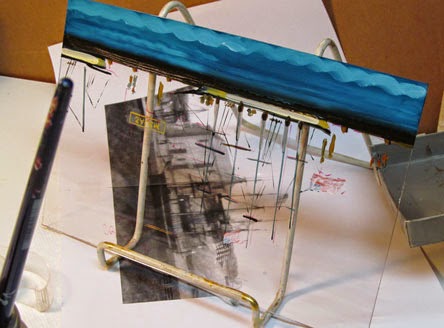 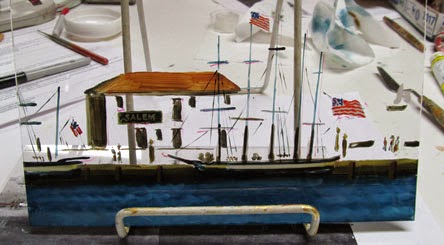 As this progresses, I already have notes on what will change in next version. I'll probably need to do a second test panel before the final.

Posted by FortHill at 8:08 AM No comments: