This Mirror Had Visitors

Oh, the perils of purchasing something on-line!
This small mirror was inexpensive (yes, you get what you pay for) but the size and look were appealing, particularly since although the mirror plate was likely not original, they followed the convention of beveled edge, separate plates.
Upon pickup, the mirror required a bit of examination. Still unclear to me is whether the frame is original, or an adaptation/alteration. There was evidence of insect infestation (although not current). Particular enticing areas were the small blocks holding the mirror plate, which, as was usual, were adhered with an animal glue. Very tempting to insects. In addition, some of the built up gesso suffered the same fate, again, due to the animal glue component.
Since there is no evidence of fresh or recent frass (a classier name for insect you-know-what) I'm not concerned about continued damage. Treatment will begin with wood consolidant, then rebuilding of the most damaged areas.
The surface has an old finish. I'm thinking that a cleaning/waxing will be in keeping. The liner, once repaired will be re-gilded.
Approximately 39" x 14" Purchase date 8/10/19 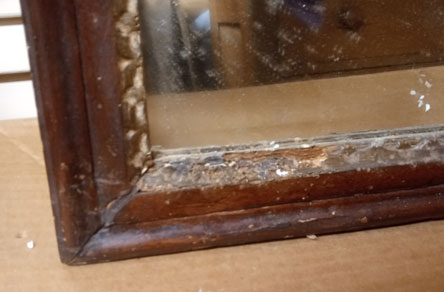 Back in the day, when you went to a picture framer they didn't always just cut and join pre-finished moldings. I really like the frames that truly were "custom" where the framer started with wood and created a surface treatment.

I purchased this painting a few years back. The frame's finish had suffered greatly. Two legs of the frame were down to bare wood. Possibly it had gotten damp and the gesso deteriorated, or perhaps someone started trying to (misguidedly) return the frame to "natural wood" and gave up.

After a cleanup, new gesso was applied. A painted finish was built up with applications of various colors, along with some gentle distressing, to wind up with an "interesting grey".

There is no finish or additional work over the paint. When the painting is sent out for cleaning and re-varnishing I may need to adjust the frame color. Finishing will take place at that time.

Posted by FortHill at 7:51 AM No comments:

These little mirrors are smaller versions of the typical early 19th century "cottage" mirrors with their split balusters, corner blocks and a panel at the top. The antique version would hold a reverse glass painting. These mini versions usually had a print of a "Colonial" scene, and judging by the photos or prints they appear to be from the 1020s or so.
They show up fairly frequently, and I don't know why I bought this one. Probably just felt bad for it. I spruced up the frame and did a reverse glass painting. It now looks more like a period mirror.
This wasn't a particularly difficult or time consuming project, so why was it on the wall of my workshop, staring reproachfully at me for a few years before I finally tackled it? As they say, "the cobbler's children....".
Anyway, another of the pandemic era projects is finally done!